UPDATE: We got rid of the file cuz’ it didn’t record properly, we apologize for this folks and next weeks show should be better!

UPDATE: Verizon Wireless has stated they have no comment on this occasion as of yet. That’s right folks – it’s official. According to a report from 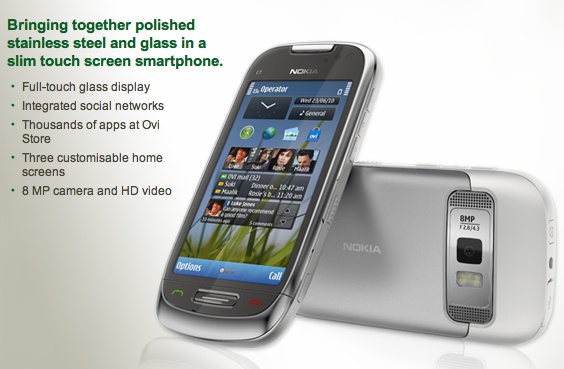 T-Mobile rumors of the Nokia C7, aka "Tiger" have been correct as we see the device was just added to Nokia's inventory list. Nokia has

T-Mobile Rumored to be lowering the Even More individual unlimited plan to $79.99

T-Mobile customers currently on the Even More individual unlimited plan or the Even More Plus plan, get excited!! Your monthly price is said to be

T-Mobile and Samsung Galaxy fans, you have a new device coming your way soon! With their latest press release we understand that we can expect

Our Geeks have talked about this device and come to find out, it's absolutely what you expected and more! The Samsung Vibrant 4G has been

We’ve seen the rumors of the Google Nexus Two, supposedly made by Samsung this time instead of T-Mobile. Earlier this morning, a Google Nexus S

Skype Now Available On Android For Everyone!

Skype has been available on Verizon Android phones for a while now, but because of the exclusive deal between Verizon and Skype, it was limited

Microsoft has officially confirmed that it will launch the long-awaited Windows Phone 7 on October 11th with events worldwide, including the main one in New

For those of you waiting for another mainstream tablet that offers cellular connectivity besides the iPad, your wait will be over soon. Yesterday, Samsung

T-Mobile seems to be the USA carrier really helping Android take off, and today, they unveiled yet another Android phone, the Motorola DEFY. This is