Recently the people at TripAdvisor.com have created a mobile version of there web site.  For those of you who don’t know Trip Advisor (TA) is a site that rate hotels, restaurants, bars, resorts and any other place of tourism.  They have user generated reviews to give you their personal of  the location.  Now some of you may think if anybody can write a review what stops the owners or employee’s of said establishment from writing false reviews.  Well they have algorithms that monitor sudden fluctuations in establishments flags sudden spikes.  Also if those establishments are found to be writing fake reviews they place a red banner saying that “some of these reviews may be falsely written.”

With this much dedication to making sure real reviews are posted they came up with doing a mobile version of their site.  As you may know some times when a well know website makes a mobile version of it self it tends to lack the essence of that site.  A watered down useless feeling tends sets in, but with TA’s site it doesn’t have that feeling.  they really managed to condense it for mobile user with out many sacrifices.  The mobile version of there is very useful when looking for a local places to eat or finding out if the place your staying is really as great as they say.  I recently found my self looking for a good restaurant in the area, I had turned to google maps but it really didn’t tell me much about the places and some of the other places were closed.  So I turned to TA’s website, I knew where I was so I put it in and found a great place near by.  The mobile version is still in beta but its a good site to bookmark for the person on the go. 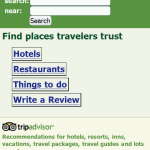 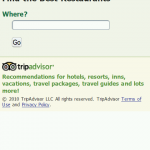 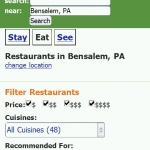 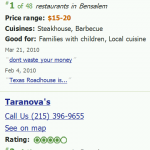 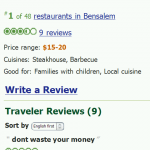 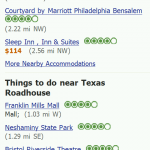