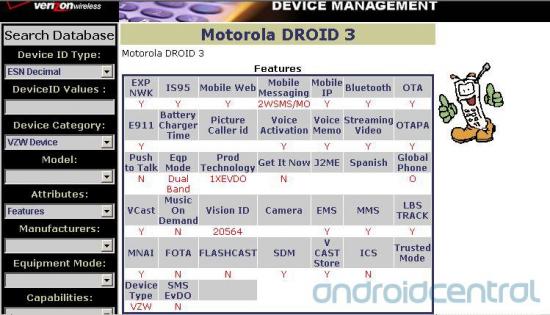 Well readers, it appears as though the long awaited Droid 3 is almost here. Or so you would think, by seeing it start showing itself

Many of us have been holding out for a tablet that can pretty much replace our desktop/laptop at home. Asus seems to have come up

It was only a matter of time and we all knew it was coming. The Verizon Droid X has been fully disassembled by the

According to reports that have been surfacing from Motorola Droid owners that have received the update to Android 2.1, Google Earth has not been accessible

The first phone to be officially upgraded to the Android 2.1 operating system is the Samsung Galaxy Spica (also known as the Galaxy Portal).

For all of our Verizon Android users out there, if you're willing to take the chance, you can finally get Android 2.1 for your Motorola

Back in January, we reported on a rumor that At&t was getting the Milestone (GSM version of the Droid). It appears this version of the

We’re sure you’re aware of the Motorola Droid, selling on Verizon Wireless. What you may not be aware of is that there is a GSM

As the rivalry between carriers and phone companies heats up, Android seems to be winning. Android just keeps getting more and more buzz. Apps are

Originally, Verizon had said this update would be pushed out to customers in “the coming weeks”.  There have been reports now that some customers have