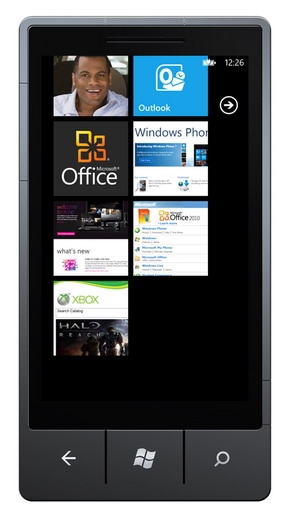 So If you are like Courtney1985 (from here on out she will be referred to as Courtney) around here on PPCG you are consistently asking me or other fellow WP7 PPCG’s what the heck Live Tiles are. Well in short, a Tile is your application on the home screen in WP7, which is how you access what you need to do on your phone. Now a “Live Tile” is just that, same concept of a Tile, but this has LIVE feeding information coming into it. This changes as the PNS server push that Microsoft has updates the application. But I am getting ahead of myself. Let’s step back and let’s look at a tile, with pictures. Let’s face it we all love a picture book of information. What you see above is a tile, well three to be exact. All a Tile is; simply a blue square. A WP7 Live Tile is a Blue square that is updated every time new information is received, all the time.

Now let’s say we have a program, a program called Twitter. As your friends post tweets you receive that immediately on your phone through a server that Microsoft made available to developers, like Twitter. This can be the same for Facebook as well. This server is called PNS, you might have heard of something similar called APNS, this is Apples version of the same thing. This is used for the iPod, and iPhone. PNS servers are simply a cloud based server that you can load your application into to allow it to update for you. Simply put it is like an RSS Feed for us bloggers, and followers.

Every program you install on Windows Phone 7, gets turned into a Tile, even if it is a still picture. This happens by the interface called Metro UI. Love it or Hate it, Metro UI is fluid and constant throughout the device. Since the launch of WP7 is coming next week for us here in the United States, and already out for European Countries, we have seen question arise. “Why Don’t My Live Tiles update?” well simply they are not live, or they are missing the PNS server setup. Regretfully, we as end-users can not make a PNS service for the program, it has to come from the developer. I hope that the Developers really take a hold of this feature, and if not I hope that they [Developers] will allow us a voice for them to make a PNS server setup.

To learn more about this article please look to our source, and the following links: