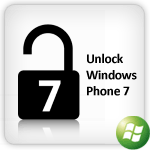 There’s a bit of good news coming from the ChevronWP7 team, it seems it’s been a while since we have heard much from them. That is besides them actively coding, running Aussie DDD WP7 Mango presentations, releasing fixes for the “Walshie” WP7 forced Nodo tool and twittering away… Well, now they have made a pretty big Windows Phone announcement, completely backed by Microsoft.

This announcement was based on the initial vision which brought the ChevronWP7 team together in the first place. This vision was for a lower-cost alternative method to Developer-unlock your Windows Phone handset, along with the side-loading of Apps, homebrews and other community based initiatives. Unlike the iPhone Dev Team, this service won’t be free. Customers will have to pay a minimal fee via PayPal and then they will have the ability to jailbreak and load homebrew apps on their handsets.

The ChevronWP7 team at their core, came about out of the shared vision of Home-brew and the enthusiast community creating, developing and pushing this new OS platform to its fullest potential, even if not supported by Microsoft. Well, Microsoft has taken the high road with all of this and has embraced their creativity and invited them to a meeting. That is when things got quiet until now.

The announcement on their Blog (pictured below), confirmed a forthcoming initiative from the newly created CHEVRONWP7 LABS team. It would appear that this is going to be the name under which any further WP7 software, tools or general releases from the ChveronWP7 team will be made under. The specific Blog post on their site confirmed a forthcoming low-cost alternative to Developer Unlocking your Windows Phone handset, in-line with their objectives to promote and support the home-brew, developer and enthusiast WP7 communities.

Important enough to mention again, is that this initiative will be fully endorsed up-front by Microsoft.
I have to give a huge amount of credit to the Chevron team (Chris, Long and Rafael), for standing strong behind their initial goal of supporting the WP7 enthusiast community and developers.

Will you pay a fee to jailbreak, knowing you have Microsoft’s permission to do so?
Is Microsoft starting to also see the value of the developer and enthusiast community?
What are your thoughts on all of this? Let us know in the comments below. 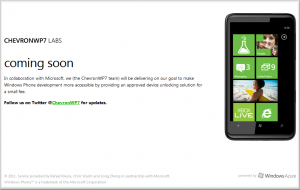