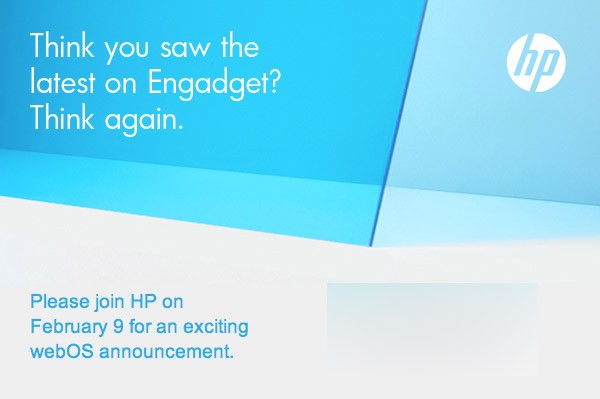 Not only does Sprint have a special announcement coming in February, now HP has something up their sleeve as well. February 9, 2011 at their WebOS event in San Francisco many of us suspect they are going to announce several products, including tablets. Maybe they will officially announce the Topaz or the Opal, two tablets Engadget previously mentioned here.

What’s exciting about the announcement? The email HP sent to attendees asks them to ‘Think Big. Think Small. Think Beyond.’ What do you think about that? It tells me they have a big secret in store! What do you think it could be? What all products do you think HP may have coming up? What sort of announcement do you want to hear? Let us know your thoughts.

Once the announcement is given believe we will be back telling you all about it! For now, discuss in the comment box below.