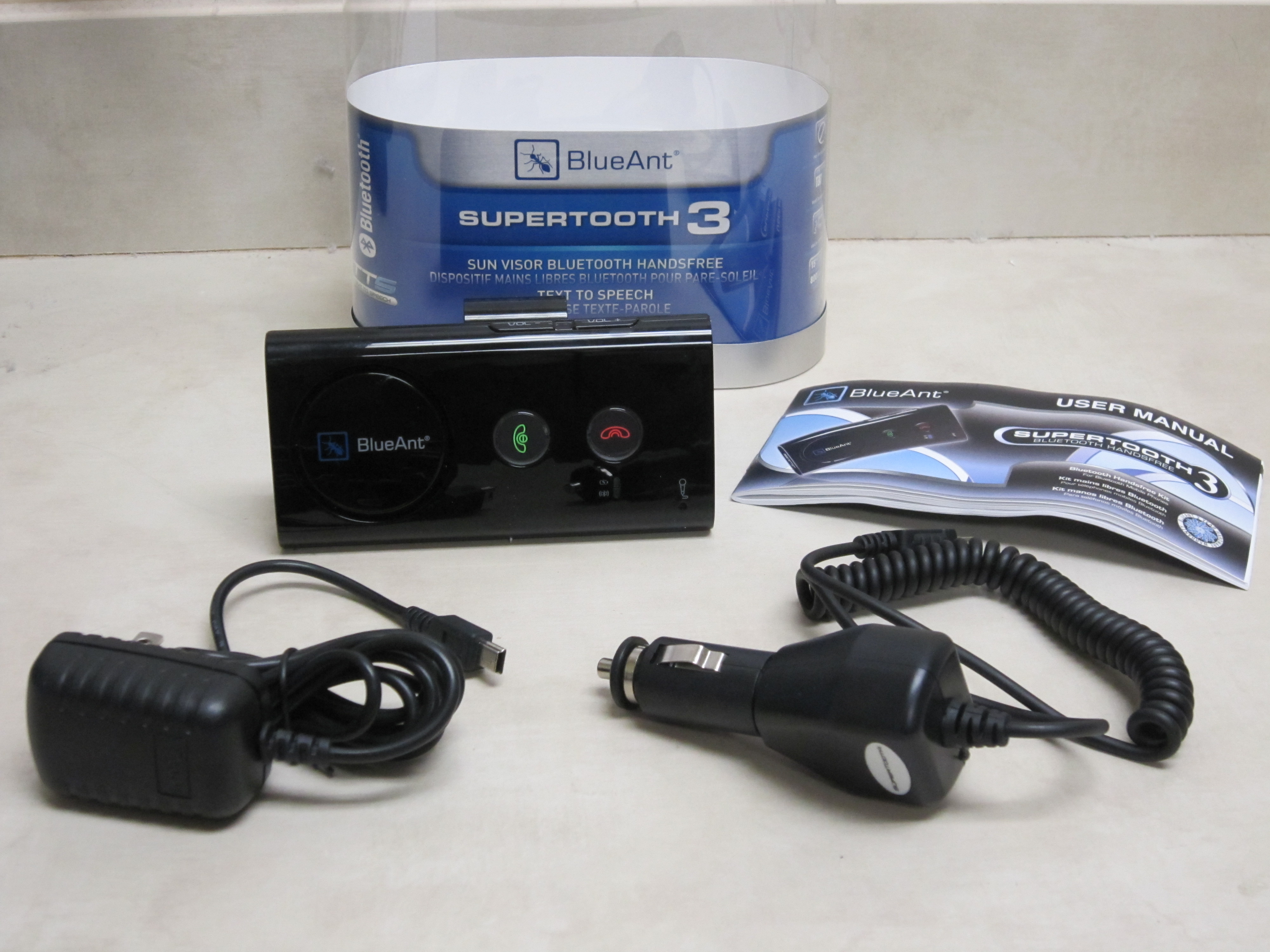 I was privileged in being able to write a review on the BlueAnt SuperTooth 3. This is a speaker phone made for your car and works with text to speech, noise canceling and voice answer. It also tells you when you are disconnecting and reconnecting to a call as well as being able to talk to you in six languages!

The boxing of the unit itself was nice, and simple. It came with a car charger, house charger and two mounting brackets for your visor and of course the unit itself with an owners manual. It was clear wrapped with plastic.  The first time that I used the device it connected without problems. The voice prompts were a little hard to understand when I turned my unit on the first time because the volume was all the way up which is what made it hard to understand.

So the set-up of the device was easy; the same standard setup for bluetooth devices with entering a pin of “0000”. It then goes through a brief connection setting up the hands free part. Here is the catch it then disconnects the hands free and then asks to initiate the transfer of your contact book. This is great, and is also super easy but it does take it’s sweet time. I have about 450 contacts on my phone and it took it about 10 minutes to transfer all that data to the unit itself. I think that this could be improved on but it is really nice feature! I love how you get to chose the accent of the device, of course I choose American English.  The other languages are: British English, Spanish, French, German, Italian.

As far as it goes installing in the car you slip the metal clip over the visor and then attach to the BlueAnt SuperTooth 3 via the two magnets on the back of the unit. This is super nice if you have to take the speaker phone with you into a building it comes off easy with little hassle. It comes with two clips so I guess for two different cars and it is nice not to have to pull the clip off and switch cars. Well the unit itself measures 4.8 inches in width and 2.4 inches in height. I have to say that it feels about right when you hold it in your hand. When it is clipped on your visor I can say you don’t notice it at all! I really like how it feels and also looks when in use in a vehicle.

Ok so this is the brass tax of everything and is what we all care about…Let me explain how I tested the unit and what was told to me by the person on the other end of the calls.

First I tested it in my basement in our utility closet, this is by far the most quiet room there is in my house. I called both land line and cell phones and also made sure to switch who I called to get good quality feed back. I tested this with a land line first and the other party told me it was very clear, they couldn’t even tell I was on a cell phone. Understand this was a “perfect environment”. I then hung up with them after a total of 30 minutes. (Hey I am a guy that likes to talk)

I then called another friends cell phone. This is the interesting part, during our call of 30 minutes they had to ask me to speak up several times and said I sounded gargled. When I turned off the unit itself, and talked via my cell phone microphone they said all the sound issues were gone and to stop screaming at them. I do not know what happened there, but it did seem strange.

So for my third call I figured I would do a party call – one to a land line and one to a cell phone at the same time. I have to admit I called my parents on this, figure what better way to test it. We talked for a little under 15 minutes, and they both told me that they loved how crystal clear I sounded. I personally feel the second test just had a bad connection – somewhere in the loop.

Let me explain my truck it is a 2005, Chevrolet Silverado Crew Cab. I have 4 windows and a big V-8 engine. What a better way to test it then in this vehicle. Normally the cab is really quiet and very little road noise, engine noise but lots of radio noise. I love my music! So I called the same people over again with windows rolled up. Other than places where my cell phone would lose a bar or two in signal strength everyone said it sounded awesome. They could not hear my engine when I revved it up, and when I had my radio on. They also said that it seemed to be better than my normal cell phone conversations with them. I did have many complaints that the other end would hear themselves talking – like reverb… I.E. the microphone was picking up themselves from the speakerphone.  This is not all abnormal but it was bad enough that I had to end a couple calls because of the echoing the other parties had.

I then decided on a nice day of 55 – 60 degree weather to drive with all four windows rolled down, and talk to them again and really test the SuperTooth 3 voice DSP voice and echo canceling technology. This was amazing that I was able to have a conversation with all windows rolled down doing 70 MPH down the freeway without them having any trouble understanding me, and with a little volume control I was not having hard times hearing them. I was really surprised that this unit canceled out a lot of the wind noise.  I did get complaints that I did sound abnormal though, and I figure this was the unit trying to over compensate for my windows being rolled down.  Overall I really liked the quality it gave me in this situation and I was really surprised how well it functioned with my windows rolled down.

So after getting the unit a full charge I have yet to charge the device back up. It gives you about 30 days of standby time and 15 hours of talk time. I have used the device for about 8 hours of talk time and it has been in stand-by time any other time, I do not shut this device off ever.  It has a really awesome feature that it detects when your car door is open, and closed and will reactivate and reconnect to your phone whenever you get in and out of your vehicle. This is super nice if you forget to turn the unit off – it goes to sleep. I find that it is quick to reconnect to – and it is quick to disconnect when you walk away. Ok so this thing does have “SUPER” in it’s name. But I did not expect it to have such a loud speaker. I mean this thing is fantastic – windows rolled down, radio cranked up and I can still hear my friend on the phone! This has to be one of the best functions of this speaker phone! I just love it. I never have to ask for my friends to repeat themselves and I hear them crystal clear. A disclaimer though, if the unit is set to full volume, the person on the other end of the phone hears themselves talk, the microphone is very sensitive. This is a drawl back to the overall unit in my opinion and I wish something could be done to fix it.

The list price of the unit when we asked to do the review was $129.00 dollars. This was hard for me to swallow because I hate to think of spending that much for a Bluetooth device. I like to buy accessories for my phone in the 40 – 70 dollar range. I don’t know just seems more practical. Now that we have had the unit the price is $79.00 dollars. Even this is a little hard to swallow but hey it is better than $129.00. The device was worth it though, and if you’re not shy about spending that kind of money on an accessory I would tell you to do it. It is amazing to talk to someone without having to hold your phone to your ear in the vehicle and not have something coming out of your ear.

I like the device it is worth the money; despite the fact that the unit did have faults with connection the few times I did use it. It does seem to be a good solution to having a bluetooth device stuck in your ear all the time to enjoy a phone conversation. The other thing that is nice is if you have a car full people and you call a friend you all can laugh and joke with each other. It is nice device overall. I highly recommend it for road trips, now that I have one I can’t live without it. I find myself on my phone more in the vehicle now that I don’t have to take my hands off the wheel and have no issues hearing the other person. Check this device out or purchase it when it is available from right here!