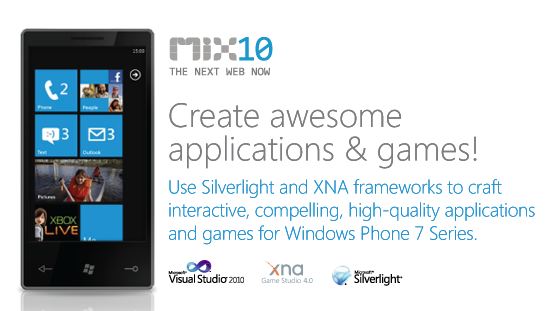 We knew Microsoft was planning big things for MIX10, which started today. There are quite a few announcements from the blogosphere today, including developer tools, Marketplace news, etc. Read on for more details!

First, according to Endgadget, the only official way to get apps on a Windows Phone 7 Series device is through the Marketplace app. In a meeting with Todd Higgs, he confirmed this rumor, which means that all developers will have to follow Microsoft’s guidelines to get published. Sound familiar? Very Apple-like if you ask us. While this is the only “official” way to get apps, that doesn’t rule out the fact that there may be “unofficial” ways to do it too. According to Todd, Microsoft plans on avoiding the headaches like Apple head by making the process transparent and predictable.

According to MobileTechWorld, Microsoft’s development tools for Windows Phone 7 is available for download now.

According to WMExperts, Microsoft has also released a carrier’s worst nightmare, Netflix Streaming! You can also manage your queue and browse their catalog, but the live streaming is huge. We wonder if carriers will try to make this a WiFi only feature.

Slashgear has reported on a new feature, which reminds us of Android, and that’s push notifications. Even apps that aren’t running in the background can use the new system, which has a blue scrolling bar across of the top of the device. 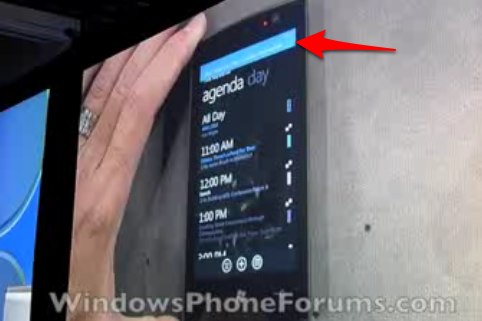 WMExperts is also highlighting Microsoft’s huge use of using Silverlight 4 in the new Windows Phone 7 Series.

IntoMobile has just posted a picture of the second known Windows Phone 7 device, made by Samsung! We’re not sure where the HTC devices are, but so far we have seen a LG device and now a Samsung one, which was shown during Joe Belfiore’s UI demo. 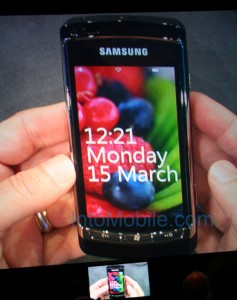 GSMArena has released the hardware requirements for Windows 7 Phones. At launch, the only available resolution will be WVGA (480×800) with HVGA (320×480) being available later. They will be required to have capacitative touchscreens. Hardware keyboard is optional. The CPU needs to have a Cortex or Scorpion, which is inside the Snapdragon. At least 256Mb of RAM and at least 8Gb of flash storage (rumors are that there will be no external storage, so no more memory cards). There is also mandatory GPU acceleration and DirectX support. It will also natively support DivX and H.264. The camera has to be a minimum 5MP with a hardware shutter key and LED flash. Other requirements include A-GPS, compass, accelerometer, ambient light and proximity sensor. The other three required hardware keys are Start, Search and Back.

Also, it has been confirmed that the HD2 will not be getting an upgrade.