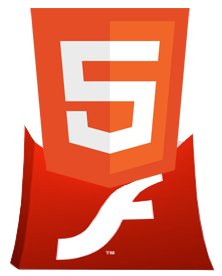 Adobe announced today via their blog that, after the upcoming release of Flash Player 11.1 for Android and BlackBerry Playbook, they will no longer develop Flash Player for mobile devices. Instead they are going to refocus their development efforts to better support the newly adopted HTML5 standard. From their blog:

“Adobe is all about enabling designers and developers to create the most expressive content possible, regardless of platform or technology. For more than a decade, Flash has enabled the richest content to be created and deployed on the web by reaching beyond what browsers could do. It has repeatedly served as a blueprint for standardizing new technologies in HTML.  Over the past two years, we’ve delivered Flash Player for mobile browsers and brought the full expressiveness of the web to many mobile devices.

However, HTML5 is now universally supported on major mobile devices, in some cases exclusively.  This makes HTML5 the best solution for creating and deploying content in the browser across mobile platforms. We are excited about this, and will continue our work with key players in the HTML community, including Google, Apple, Microsoft and RIM, to drive HTML5 innovation they can use to advance their mobile browsers.”

Developers of current Flash sites and applications will be able to be repackage their Flash content using Adobe Air. This is very good news for the industry because, after a period of adoption and transformation, all mobile devices will be able to view all web sites in [nearly] the same fashion. More from Adobe:

Our future work with Flash on mobile devices will be focused on enabling Flash developers to package native apps with Adobe AIR for all the major app stores. We will no longer continue to develop Flash Player in the browser to work with new mobile device configurations (chipset, browser, OS version, etc.) following the upcoming release of Flash Player 11.1 for Android and BlackBerry PlayBook. We will of course continue to provide critical bug fixes and security updates for existing device configurations. We will also allow our source code licensees to continue working on and release their own implementations.

Some contribute the recent announcement by Adobe to an open letter that the late Steve Jobs published in April, 2010 entitled “Thoughts on Flash.” In that letter Jobs stated that while Flash was a good, marketable choice for Adobe, he believed that they should instead put more effort into adopting a higher degree of HTML5 support.

So what should we think; is Adobe moving ahead or giving into the technology advancements of mobile devices? With these changes coming quickly, does this mean that Apple will sell even more iPads and iPhones, now that Flash will no longer be a factor? Is there any reason that Adobe shouldn’t do this? Let us know what you think in the comments below.