I am not sure how many members we have from London here, but Google is looking out for you (and hopefully a sign of things to come). The new version of Google Maps has been released and it has the London Underground and transit maps included in it!!

This may not seem like big news for members outside London, but if you stop and think about it, this could possibly set a fantastic precedent for anyone using a form of public transit anywhere! Can you imagine getting off the plane in unfamiliar territory and needing to stay a while for some reason, or needing to get to a meeting across town fast? If Google Maps keeps developing this system I could easily see bus, subway and maybe even Taxi company (probably as quick-links) routs, schedules or contact info automatically available upon launch of the app. Google Maps will detect where your at and determine the best route to get to where you set as destination and map out the schedule for you: 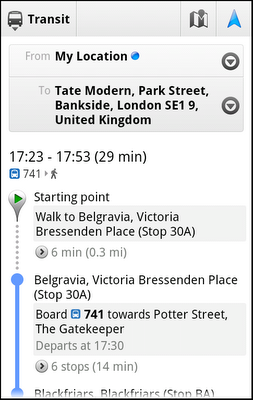 This release is for Android, IOS and Blackberry devices, but as an added bonus to Android users, you can install Transit Navigation (beta) which enables alerts to be sent when it is time to transfer or get off the bus or train.

I have high hopes for this to be further developed to include other countries and transportation systems, but who knows…What are your ideas or thoughts on the future of this app? Do you think there is a need for this to be released? Tell me below PPCGeeks – what are your thoughts exactly.