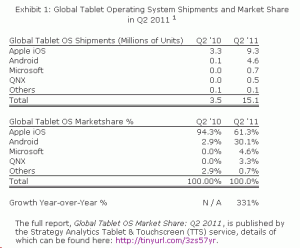 RIM and Microsoft has made a slight increase as well, accounting for another 8%.  This all adds up to a real eye-opener for Apple seeing as Android is taking a large jump in sales and continue to come out with ‘bigger and better’ devices every day!

An interesting little interview mentioned over at droid life talkes about the NVIDIA CEO Jen-Hsun Huang’s opinion that Android will overtake iPad eventually. He notes the use of NVDIA’s Quad-core chips and the interest in the new  Kal-el quad-core processor that he firmly believes will take Android tablets to the next level. Here is a quote from that interview:

“The Android phone took only two and a half years to achieve the momentum that we’re talking about. I would expect the same thing on Honeycomb tablets,” Huang told the Reuters Technology Summit in New York on Monday

We can see the changes / improvements / break-throughs Android makes almost daily with all the new devices coming out, open-source development and news releases seemingly hourly some days, so we know Google is making great strides. The wild card (as always it seems) is Apple…they have always been secretive and usually only releasing minor or needed tweaks/repairs until a major release blows the market away.

What do you think? It won’t be easy, nay take years and I am sure we will see a lot of broken transistors and cracked screens along the way, but does android have what it takes to overcome the iPad? I wouldn’t want to see either OS go down in flames, they both have their strong points, but it makes for a fun race that works out in our favor with competitors usually releasing better devices at lower prices…..Win-Win for us!!!