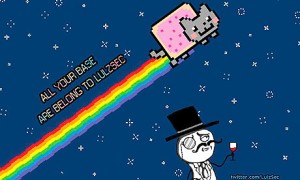 “Yarr! Our ship has recently sailed upon some juicy AT&T findings… this might be delicious…”
This was posted 6 weeks ago from the recently well known LulzSec Lulz Boat and now we have some new information about it.
Who is LulzSec and what are these leaked AT&T findings you ask?
Well, let us try and give you at least a glimpse of what both of these are all about. 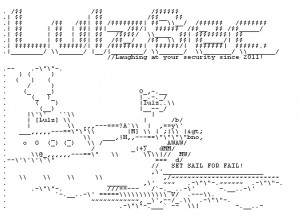 First, we will begin with a little information about LulzSec. LulzSec draws its name from the modern term “Lulz,” (from LOLs) which often signifies laughter, and “Sec,” which is short for “Security”. Essentially, their way of laughing at the poor security of many large companies that should be much better protected. Just after midnight on June 26th, 2011, LulzSec released a “50 days of lulz” statement, which they claimed to be their final release, confirming that LulzSec consisted of six members, and that their website was to be taken down. The release includes over 750,000 accounts gathered from several gaming forums and a major part of it from Battlefield Heroes Beta. The list of the leaked accounts was later made available at Dazzlepod.com. Well, there final crop of documents contain some interesting information about AT&T’s future data plans. More about that in a bit.

Ryan Cleary, is the person who is considered the LulzSec mastermind who recently attacked Sony, the US Central Intelligence Agency and the US Senate. He was arrested last Tuesday, June 22nd in England and could be facing up to 10 years in jail. The arrest of Cleary came within hours of the UK’s premier investigating agency’s website being taken offline as a result of a cyber attack. Detectives swooped down on Cleary’s Essex home swat style and snatched him out of his bedroom, which he had reportedly not left for almost four years.

According to Cleary’s mother he is an ultimate recluse. He left his bedroom only to use the bathroom and had never gone out of the house in the last four years. He suffers from agoraphobia, the fear or open spaces and has a confirmed Attention Deficit Disorder personality. He would have her leave his meals at his door for him, like an inmate.

Cleary is a heavy metal fan who has been thrown out of two schools for disruptive behavior, according to the Sun. “Ryan is obsessed with computers. He’s a bit of a geek. That’s all he does, he’s a recluse. He locks himself in his room every day, closes the curtains and spends hours at a time online,” Cleary’s 22-year-old half brother told the Sun.

The British police believe Cleary is a big part of the inner ring of the LulzSec and that his arrest could give vital leads to the hacker group. But LulzSec insists that he is not part of them. “Ryan Cleary is not part of LulzSec; we house one of our many legitimate chatrooms on his IRC server, but that’s it,” LulzSec tweeted. “Clearly the UK police are so desperate to catch us that they’ve gone and arrested someone who is, at best, mildly associated with us. Lame,” the group tweeted.

Under recently revised US laws, Cleary could face up to ten years in jail. He is very likely to be extradited to the US, where according to current laws, first-time hacking offenders can only receive up to a ten year sentence. With the maximum sentence for simple data theft at currently only five years. The Obama administration has urged Congress to pass new laws that would double the maximum sentence hackers could receive.

After fifty days of releasing large amounts information of confidential data, from police units to government departments, CIA, AOL, Sony, and many others, LulzSec announced on its Twitter feed Sunday evening, that it is to disband.

So it appears that the supposed six that are mentioned in their press release as being the ones behind the modern day pirate type group have called it a day.

In a statement via its official Twitter feed this evening:

“Again, behind the mask, behind the insanity and mayhem, we truly believe in the AntiSec movement. We believe in it so strongly that we brought it back, much to the dismay of those looking for more anarchic lulz. We hope, wish, even beg, that the movement manifests itself into a revolution that can continue on without us.

The support we’ve gathered for it in such a short space of time is truly overwhelming, and not to mention humbling. Please don’t stop. Together, united, we can stomp down our common oppressors and imbue ourselves with the power and freedom we deserve.”

Ok, well what does any of this have to do with Mobile devices or AT&T you still wonder, right?

Well, in their one last and final drop of data they have retrieved (stolen sounds harsh), amongst many other files were documents posted containing technical details about the telecom giant’s rollout of its next-generation wireless technology, commonly known as LTE. Though the information could very well be outdated and obviously never meant for public consumption, it does give some insight into some of the thoughts and ideas they were at least looking at, such as speed and session-based pricing for their upcoming LTE network.

The most interesting and perhaps threatening detail for networks with data cap tiers like Verizon, is that AT&T’s proposed plan is to market LTE data with various speed tiers, which it’s calling “Speed Based Pricing.” Verizon’s about to switch to tiered pricing for its data plans (3G and 4G), but that’s based on total consumption, not speed. The basic idea would be pay more, and you get faster LTE speeds. Not exactly a new concept, cable and satellite companies have been going this route with their Internet access charges for quite some time now, but it could be an interesting change in the mobile space and possibly better then Verizon’s new approach. According to the leaked documents, you could also pay for a session, or temporary speed boost if you need it, which is also becoming more and more common in the broadband market.

Another big detail stumbled upon in the documents is a slide stating the following:

Pre-LTE scenarios: Testing will include iPad new activations HLS using the new rate plan, as well as a regression on netbooks and dongles. During validation E2E execution should ensure all functionality new and current is still functioning properly by validating account set up, provision, usage and notifications. 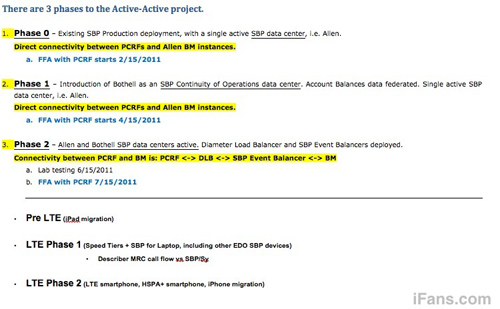 The LTE-ready iPad, is likely to be the iPad 3 which is expected next year with a higher resolution Retina Display, a faster processor and, according to the leaked documents, 4G LTE connectivity on board.
Another page in the documents supports the numerous rumors surrounding an iPhone 5 release in September. It clearly states that there will be three phases to LTE network deployment: with a potential LTE-ready iPhone 5 releasing in Phase 2, which is right on schedule for the rumored September launch period.

Of course, AT&T likely won’t have LTE available until it unleashes the iPhone 6 in 2012, but it’s still interesting to see where the industry could go by that time.
Any of you have an interest in speed or session based pricing, or are data caps complicated enough already?
Do you see this plan staying on track, even with the T-Mobile merger?