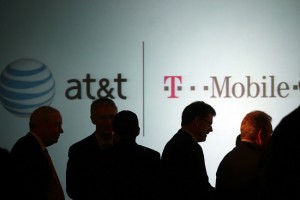 NEW YORK, NY – MARCH 21: Executives at AT&T attend a news conference where it was announced that AT&T Inc. will be buying its wireless rival T-Mobile USA from Deutsche Telekom AG for $39 billion in cash and stock on March 21, 2011 in New York City. The deal, which will be scrutinized by U.S. regulators, would create the nation’s largest wireless carrier if approved. The deal would likely result in domestic job cuts. T-Mobile USA employs about 38,000 people while AT&T employs an estimated 267,000 people. (Photo by Spencer Platt/Getty Images)