I have recently been given the opportunity to review the Powermat 2x Mat and Dual 1850 battery pack, courtesy of the Michigan based company. To start out I would like to note that before I used the battery pack, I was the kind of person whom toted at least 3 fully charged batteries with me wherever I’d go. However, the consequences of having a juice-sucker like my EVO and needing to constantly change the battery are long gone thanks to the Powermat. The mat comes with everything you need to get started: from commonly used tips to a convenient carrying case included for the pieces when traveling on the go, you will always have what you need and never have just a haphazard pile of adapters sitting somewhere waiting to get lost. The first thing I did was separate the tips that I was going to be using and put the others away in the nice little bag included. Typically the external batteries come dead as a doornail from most companies, as the cells are made in China or Japan, but the Powermat battery already came with a near full charge! The most commonly used tips included are a Sony camera plug, Apple iPhone and iPod, Nintendo DS Lite & DSi, Samsung, LG, Mini USB and of course Micro USB! 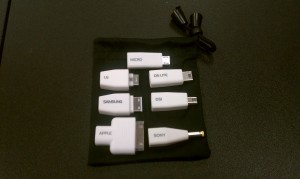 The dual 1850 battery pack is a dream! It’s probably hands down one of the best portable devices to recharge your phone with in my opinion. It has multiple ways to charge, whether it is on the Powermat or via the Micro USB port located on the device. Once fully charged it packs an 1850mAh punch to recharge your device’s battery; mine is only 1500 mAh, so I expect it to fully charge my phone even when it’s dead as a doornail! (Great if you constantly forget to charge it overnight.) It also has a retractable iPhone/iPod tip that pops out the side. Sadly this will not charge an iPad due to the device’s mAh output limitation – it’s just not enough juice. It also has a Micro USB cable to charge any device compatible, which I used on my HTC Evo when it died instead of having to remove the case, remove the battery cover, swap batteries, and put it all back together; those days are OVER!

These days I just have to charge my phone with the 2x mats and universal adapter, while simultaneously charging the dual 1850 battery pack. Much better than carrying tons of batteries around! When I leave for the morning I just carry my phone and the battery pack with me, all together two full batteries, which gets me through even the toughest of days. No more yanking that case off to swap batteries – it’s a wonder! Once the EVO battery is getting low, I just throw it on the battery pack and get a full charge in no time. I’ve also noticed that the phone rests nicely on the back of the battery pack while connected to my HTC Evo as seen in the photos below. All thanks to the power of magnets!

Overall, I would have to say that the Powermat products provided to me for this review were great. I would recommend them to anyone that is a multiple battery carrier or anyone other battery-changers out there. You know it’s a pain and if you can afford the price tag, RUN to your nearest store or head online and grab one.