Verizon Wireless adds another handset to its’ very popular Droid line this Thursday with the official announcement of the Droid 3. The Motorola Droid 3 is available online now and in stores on July 14 for $199 with a 2-year contract or $459 with no contract. Existing Verizon customers can upgrade their phone and keep their current unlimited data plan, but new customers must choose from three tiered data plans ranging in capacity from 2 GB to 10 GB per month.

The new Droid is a welcome refresh over its predecessors, with a faster processor and support for global voice and data networks. Motorola is billing the Droid 3 as “the world’s thinnest full qwerty smartphone.” Sounds familiar from the days of the Razr or even more appropriately, the Motorola Q.

Anyhow, although it isn’t LTE capable, the new “superphone” boasts some pretty impressive specs. With the new and improved display, dual-core processor, and GSM support for those that need it, the Droid 3 looks to be a very worthy upgrade over its’ predecessor, the Droid 2. The addition of a dedicated number row on the keyboard is also a nice feature to round out the list of improvements. 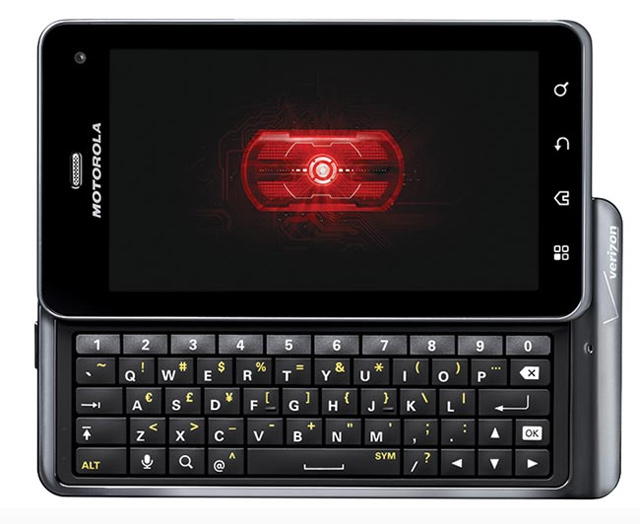 Motorola is referring to the Droid 3 as “enterprise ready.” The new device and SD card feature encryption, complex password support, remote data wipe of device and SD card. The Droid 3 also comes equipped with QuickOffice for editing documents on the run, as well as Citrix GoToMeeting for Android.

One downside so far, is it seems Motorola skipped unlocking the bootloader on this device.
Bad Motorola, or was this verizon’s choice? Maybe there will be a change of heart, before the Devs beat them to it.
Will you be picking up one of these new Droids from Moto, or are you still waiting for the infamous Bionic?
Where do you see this device fitting into the current line of handsets today?
Does no LTE, make it less appealing?