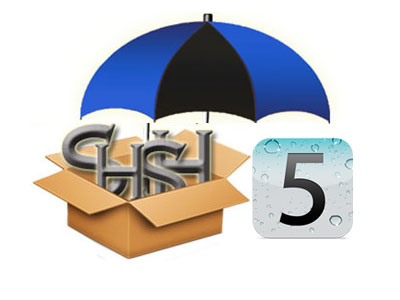 By now I’m sure you have read many times, that before you attempt to jailbreak or unlock your iPhone, iPad or iPod Touch, you should first save your SHSH blobs. Well, the iPhone Dev team has just revealed in a blog post titled “Blob Monster”, that Apple is making things much more difficult to downgrade to an older firmware using SHSH blobs in the coming iOS 5.

Why save your SHSH blobs and WHAT are they, you ask? In a nutshell SHSH blobs are configuration files from your iPhone / iPad / iTouch corresponding to the specific version of the iOS you’re running as well as your particular device’s exact configuration. You should save them before you do upgrades to new versions of iOS or if you’re installing a jailbreak/unlock tool, since they will help you keep your specific hack intact. This which is not possible by default, as Apple stops signing older iOS firmware files after it releases a new iOS software update (usually used to downgrade to an older version of iOS). If you do not save them, the next iOS upgrade can ruin your jailbreak / unlock or hack… forever.

The easiest way to save your SHSH Blob is by using the TinyUmbrella tool because it can take blobs saved from any iDevice, even if it’s not jailbreaked. Another option is using Cydia to save your configuration, although not all Cydia versions support this option, so TinyUmbrella is the popular choice.

Quoted from the Dev Team’s Blog:

“Starting with iOS5 beta, the role of ‘APTicket’ is changing — it’s being used much like the ‘BBTicket’ has always been used. The LLB and iBoot stages of the boot sequence are being refined to depend on the authenticity of the APTicket, which is uniquely generated at each and every restore. This APTicket authentication will happen at every boot, not just at restore time.”

It looks like Apple’s starting to get real about fighting back with Jailbreakers. Although honestly this could be an even bigger nuisance for non-jailbreakers. As many of you may still be sporting an iPhone 3G and the latest updates really take a toll on your iPhone’s resources and overall performance. In these cases you could just revert back to an older firmware to get things back to stable, but now it’s going to be more difficult to even downgrade for legitimate reasons.

In light of this new move from Apple, this means that you have to be even more careful when Apple releases a new iOS software update post iOS 5, until the Dev team comes up with a solution since as of now there is no way to revert back if you end up accidentally upgrading to it.

In an industry where Android phones are going to start to come unlocked by default, Apple continues to ramp up their efforts in its’ game of tag with iPhone jailbreakers and unlockers, as they have also just reportedly blocked the iPhone 4 hardware unlocking solution using Gevey SIM in iOS 5 beta 2.

How do you feel about this move from Apple?
Will you still be eyeballing that iPhone 5 when it gets here?
Do you think Apple’s efforts are futile and could be better spent on other things?
Or do you feel the security they implement is warranted and necessary and adds to the stability of the Apple product market? (you know, since nobody runs a hacked iPhone, right?)
Let me know your feelings about this latest move from Apple below.