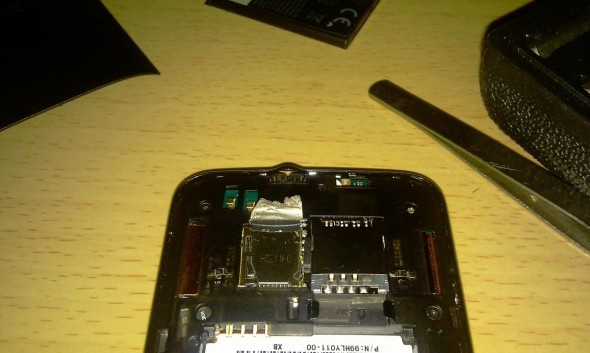 In our recent article describing how the MicroSD of the HTC HD7 was irremovable, we had great feedback as well as other sites did too. Some of you said this will of course pressure the more advanced users out there in the world to figure it out and that’s just what someone over at XDA Developers has done. Thanks to an XDA member derekcranson, he has proven that the MicroSD card can successfully be replaced. The trick is just a hard reset after you’ve swapped cards and you’re good to go. With that said, be sure to backup all of your information before doing this procedure on your device.

Derekcranson states “To replace the battery half of the back of the case comes off. Very gently the other half of the back of the case will come off the same way. Next to the Sim card slot there is a micro SD card slot, with the card in it. However to remove the card it looks like all the screws will have to come out and then the plastic cover removed as the slot is set in it.”

He continues saying “If you take off the cover to access the battery you can see 8 of the 10 screws that have to be removed. The other 2 are under the smaller back cover. The SD card is in a normal SD card slot with a bit of tape over the end. Take the card out like you would a card from any other phone (i.e. push down and it pops up). One of the screws has a void sticker on it. I’ve put the phone back together and it still works. Hard reset formats the card so that the phone recognizes it and Zune also sees it and shows used and empty space. This should work on a 32gb card but I’m going to wait until a HDSL comes out so that I can change the ROM to access the card and see if the apps from previous phones will work.”

So there you have it. If you are a proud owner of this device and were afraid to try it, maybe you should now consider doing so. Doesn’t seem like it was painful at all and the user definitely proves it can be done. I hope this makes the owners of this device much happier knowing they can have more storage!

Prospective owners of the HTC HD7 have located and described the MicroSD slot for this device and we would like to share the observations with you here at PPCGeeks. The setup is a little more than what most of us thought it would be. Thanks to a tweet from Arne at theunwired.net we get to see exactly what it looks like from deep inside the guts of the phone.

The HD7’s microSD slot is located right next to the SIM holder as you can tell in the picture above. Unfortunately unlike most phones this card is non-removable, which you may have heard of plans to make this happen previously. They say the card is “impossible” to remove without some sort of warranty voiding and even then any attempt to replace it will trigger an error message.

This issue with storage on Windows Phone 7 devices has been a hot topic for it’s current and future consumers. Why do you think this is happening? What’s the purpose? We haven’t found that answer just yet. What about the users who use more than the allowed storage or do you think that will be even possible? Let us know your thoughts!